When you are out in the wild hoping to catch a glimpse of leopards for the first time, you have big dreams about how your first leopard sighting will go.

My first leopard sighting in Sri Lanka was a let-down. Armed with a professional camera, the bare necessities, and big dreams, I had consulted every nook and cranny on the Internet for advice on where to see leopards in Sri Lanka. I ended up visiting Yala national park, but alas, absolutely no luck with leopards.

I came out of the experience convincing myself that there would surely be a “next time,” and thankfully, there was!

But since I started working as a travel agent for Travellers Isle, I have learned that leopard sightings are neither common nor rare. In fact, it is all a matter of luck. The key is to pick the right jeep safaris and the right times to improve your odds of spotting the big cat.

Yala and the Wilpattu national parks are the best places to see leopards in Sri Lanka. There are strong arguments to choose one national park over the other. Let us take a look at what these parks have to offer, and just what it is that you can expect from including them in your itinerary.

The Yala National Park is your go-to destination for leopard sightings. Touted by the Ministry of Tourism and Lands as the perfect location for spotting leopards in the wild, this park is divided into five blocks. However, most jeep safaris offer a tour of Block 1, which is where your chances of seeing leopards and other animals are highest.

Travellers in pursuit of where to see leopards in Sri Lanka often ask us, “How many leopards in Yala National Park?” There are an estimated 60 to 70 leopards scattered around the park, making it a tourist destination with the highest density of leopards in the world. But because the park covers an area of 979 square kilometres, there is no guarantee that a leopard sighting will be a part of your experience. On the bright side, it means that you have a strong chance of eventually spotting them.

If catching a glimpse of these predators is on your bucket list, the recommended time for a jeep safari ranges from between 6.00am to 9.00am and 3.00pm to 6.00pm. While I would personally recommend the morning safaris, waking up as early as 6.00am may prove to be a challenge—especially for families travelling with children. So, it is no surprise that most families choose an afternoon safari instead.

When scheduling your trip to Yala, you should keep in mind that, with the exception of Block 5, the other blocks of the national park are typically closed to the public from the 1st of September to the 15th of October. This annual closure is because of the dry season, and the absence of tourists during this time allows the animals to freely wander around the park in search of water. Block 5 is left open because the animals in the vicinity are able to quench their thirst at its large reservoir.

Travelling to Yala comes with its ups and downs. The peak seasons (December to March, and the months of July and August) are hectic, and the park is crowded with jeeps carrying other tourists. So, if the prospect of travelling among crowds is not your cup of tea, I would recommend vacationing in Sri Lanka during its off-peak season. During peak season you could always go for a jeep safari at the Wilpattu National Park instead.

While overcrowding is one of the most common complaints among tourists, many seem to be under the impression that they are guaranteed a leopard sighting at Yala. Even if your jeep races around the park in search of leopards, there is no guarantee that you will see them at all. My first leopard “sighting” is proof of that. Catching a leopard in action depends entirely on your luck.

That is why I would recommend that you focus on the other animals too. If Lady Luck is not on your side and there are no leopards nearby, you will still be able to see wild boars, crocodiles, elephants, water buffaloes, spotted deer, sambar deer, jackals, Toque macaques, sloth bears, peacocks, junglefowls, and other animals up close.

If your primary motive for visiting the Yala National Park is spotting leopards, it is best that you take a full day safari.

If crowds are no issue, and if you would like to increase your chances of spotting leopards in the wild, a jeep safari at the Yala National Park is your best bet!

Home to all kinds of flora and fauna, the Wilpattu National Park covers an area of 1,317 square kilometres, making it the largest national park in the country. However, unlike Yala, which welcomes crowds of tourists with its famed leopard sightings, this national park is less frequented—but that does not mean that your chances of spotting leopards are zero.

Not many travellers choose a jeep safari at Wilpattu due to logistic issues. In fact, its neighbouring region of Anuradhapura is not on the typical tourist itinerary, and the park itself is located further away from the usual tourist route. But that is what makes it so perfect for introverts and for those who would like to enjoy the beauty of nature away from the crowds.

While the density of leopards in Wilpattu is not as high as that of Yala, spotting these elusive predators is not completely out of the question. If you are lucky, you will be rewarded with a glimpse of them. If not, you will still stumble upon a variety of other animals, including elephants, sloth bears, spotted deer, sambar deer, mongooses, water buffaloes, peacocks, and many more.

And that is not all! This national park gets its name from the ‘villus,’ or the naturally formed rainwater lakes which complete the scenic beauty of its landscape. It is a feature unique to Wilpattu, and you are guaranteed to get a couple of shots of animals lingering by the waterside.

That being said, since we have talked about the perks of visiting Wilpattu, let us move on to its cons.

Unlike Yala, this national park is made up of dense forests and vegetation. This makes it somewhat difficult to spot animals. I have noticed that travellers who come to Wilpattu have high expectations that they will see animals in crowds shortly after entering the park, but that is not the case. While it is true that the park is packed with wildlife, you may have to venture into its depths for several hours before you are able to experience what it has to offer.

If a jeep safari at the Wilpattu National Park is on your itinerary, keep in mind that accommodation is typically arranged in Anuradhapura. As its location is further away from the typical tourist route, the lodging choices in Wilpattu are narrow. Your jeep safari here will be arranged as a day tour. So, if the prospect of travelling to and from Anuradhapura for two hours is not your cup of tea, a tour of the Yala National Park might be better suited for you.

All things considered, the chances of spotting leopards in Wilpattu are not as high as that of the Yala National Park. But if travelling away from the hustle and bustle of Yala to enjoy the wildlife in seclusion is your preference, I would recommend the slow-paced jeep safari at the Wilpattu National Park.

However, leopard sightings are not restricted to Yala and Wilpattu. We have had many guests who have spotted leopards in Horton Plains, Minneriya, and Udawalawe. But the reason why we do not recommend these locations to those who wish to see leopards up close is because leopard sightings in these locations are extremely uncommon. After all, these elusive predators can be quite difficult to spot among the rich wildlife and vegetation.

If a jeep safari at any of these parks is on your itinerary, you should be prepared for a bumpy ride. This is especially the case if news spreads fast of a leopard in the vicinity at the Yala National Park. The other jeeps may race around and crowd together, creating an uproar that may scare off the leopard.

You may also experience the congestion of the roads and a lot of noise as some jeeps forget to switch off their engines while observing the wildlife up close. This, in turn, may stress out the animals.

It goes against our ethics at Travellers Isle, because we believe that jeep safaris can be conducted in a way that leaves the animals undisturbed in their natural habitats while satisfying our travellers with plenty of close-ups.

As I mentioned earlier, spotting a leopard in the wild is all a matter of luck. But even though leopard sightings are not guaranteed, you will still experience the scenic landscapes and the rich beauty of Sri Lanka’s flora and fauna.

If catching a glimpse of a leopard in Sri Lanka is a part of your bucket list, take my advice and consider a jeep safari either at the Yala National Park or at the Wilpattu National Park.

I hope this article answers your question of where to see leopards in Sri Lanka. May Lady Luck be on your side as you try to spot leopards in the wild!

Top 10 things to do in Ella, Sri Lanka

Is Sri Lanka good for honeymoon?

Top 10 things to do in Sri Lanka with family

Must see tourist places in Anuradhapura

Top 9 things to do in Colombo

Is Sri Lanka worth visiting?

Sri Lanka with toddlers | What you need to Know

Are there snakes in Sri Lanka?

It can be an overwhelming task planning your Sri Lanka / Maldives holiday. Drop us a message outlining your requirements and get a tailor-made itinerary completely free of charge. 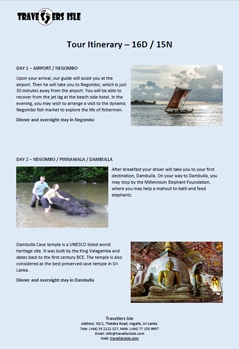 Travellers Isle is one of the few travel agencies that is certified by the Sri Lanka Tourism Development Authority (SLTDA). With Travellers Isle you are in safe hands.